“Capturing what made Pink Floyd iconic is a hard thing to do, and Pigs on the Wing come as close as anyone we’ve heard. That looming mystique, that inscrutable grandiosity……Those qualities are alive and well with Pigs on the Wing.” – Adam McKinney, OLY ARTS 5/10/17 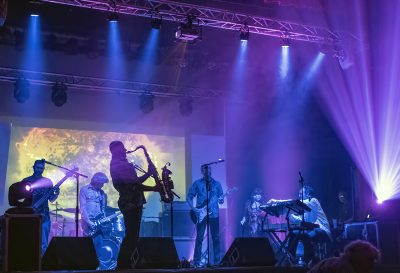 “A high-energy Portland-based Pink Floyd tribute band, whose goal is simply to share the experience of their favorite music with fellow fans in an intimate rock show environment.”
— The Oregonian, 09.21.07

Hailing from Portland, Oregon, Pigs on the Wing is a unique Pink Floyd tribute bringing the experience and energy of veteran members of the Northwest’s underground original rock scene together in a refreshing, beautifully psychedelic take on the music of Pink Floyd.

Far from an attempt at Floyd-impersonation, POTW specializes in 70’s era Floyd but is unapologetic in the interpretation and improvisation of the music in ways that the band believe any Pink Floyd fan will appreciate. Rather than focusing on exact, note for note replication of Floyd albums or any sort of look-alike mimicry of band members, POTW rather seeks to capture the intense atmosphere and rock energy of Pink Floyd in as unpretentious a style as possible. The result is a show which is true to the original and yet also a refreshing take on the music and experience of Pink Floyd.

Pigs on the Wing evolved from Portland rock band Oxcart’s performances of Dark Side of the Moon during Winter 2006. The band features a collaborative and rotating roster composed of members of Oxcart and other NW musicians brought together by a common appreciation for Pink Floyd.

Pigs on the Wing performs throughout the western United States.