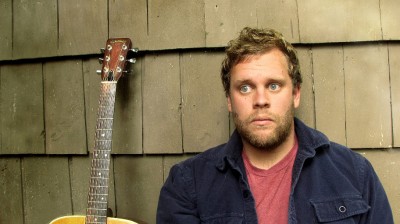 Writing about things he doesn’t understand helps Jeffrey Martin make sense of the world around him. The mystery of songwriting is what draws him to the craft, and it is this mystery that leaves the listener breathless and amazed at the remarkable character of this passionate artist.

Writing compulsively and impulsively, Martin writes deep into his head. An English teacher by trade, he loves music and teaching equally, and the combination of the two keeps him honest. “Songwriting,” he says, “pulls me deep into my head, and teaching drags me back out into the real world.”

“I don’t sit down to write a song so much as I’m sat down by a song,” Martin will say. A sucker for muddy sounds, he likes the odd hiss and crackle, perhaps a chair squeak, in a recording. It is precisely those sounds that reminds him that a living soul is moving about, pouring their soul into the moment.

When you listen to Jeffrey Martin, you will understand him when he says, “It’s funny how my songwriting, how often a song gets created, has no rhythm, and yet so much rhythm is born of what it brings.”

Jeffrey will be performing at the Lincoln Center in New York City as a finalist in the Mountain Stage NewSong contest on October 20th, 2012.

At just twenty-seven years old, Jeffrey Martin is a product of Eugene, Oregon